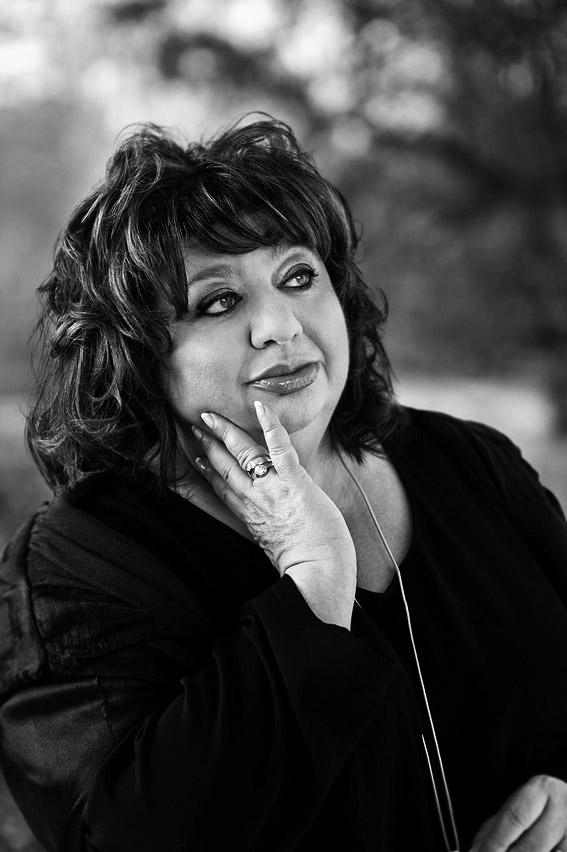 Director of the Jewish Theatre

Until 2009, she was the Deputy Director, and in 2015, she became the Director of the Jewish Theatre.

As a child, she appeared on the stage of Łódź's Teatr Powszechny. She graduated from I. L. Peretz Jewish School in Łódź. In 1969, she moved to Warsaw and became affiliated with the Jewish Theatre. Her adult stage debut as an actress was Cyne in the show “Green Fields” by Peretz Hirschbein, directed by Szymon Szurmiej (1969).

She also encouraged cooperation with many artists who were not part of the Jewish culture circle.  That included collaboration with directors, such as: Piotr Cieplak (“The Book of Paradise” I. Manger, 2010), Michał Zadara (“1666” according to “Satan in Goray” by Issak Bashevis Singer, 2011), Maja Kleczewska (“The Dybbuk” based on S. Ansky, 2015, “The Painted Bird” based on Jerzy Kosiński, 2017, coproduced with Teatr Polski in Poznań and “Golem”, 2017), Monika Strzępka (“Live Well - It's the Best Revenge” by Paweł Demirski, 2016), Anna Smolar (“The Jewish Actors” by Michał Buszewicz, 2015 and “A Couple of Words in Polish” by M. Buszewicz, 2018, coproduced with Teatr Polski in Warsaw), Michał Buszewicz (“Football Fans” by M. Buszewicz and Sebastian Krysiak, 2017) and finally Jędrzej Piaskowski (“Wiera Gran” by Weronika Murek, 2017).

She also performed in movies, TV shows, stage and TV shows, including “Comedians” directed by: Stefan Szlachtycz (1979), “Stars on the Roof” directed by Jerzy Gruza (1979), “Doctor Murek” directed by Witold Lesiewicz (1979), “Hotel Polan und Seine Gäste” directed by Horst Seemann (DDR, 1982), “The Winds of War” directed by Dan Curtis (USA, 1983), “The Little Town of Bełz... And Other Songs” directed by Barbara Borys-Damięcka (1987) and “The Dybbuk” directed by Angieszka Holland (1999). As a director, she worked on the TV version of the Jewish Theatre's stage shows, including: “The Song of the Murdered Jewish People” (together with Szymon Szurmiej, 1993) and “Townhouse at Nalewki Street, i.e. Jewish Street Hits” (together with Szymon Szurmiej, 2000), TV show “Travel Document” (together with Magdalena Łazarkiewicz, 1998) and the documentary “Travel Document. It's So Said Here Without You” (1998).

An important moment in Gołda's artistic career was the recording of songs in Yiddish “Little Town Bełz” which she did in 1988. The released record was very popular in Poland and abroad. She did several tours promoting the record, visiting the DDR, Israel, the US and the Netherlands, and other countries.

Her initiatives started numerous artistic and educational campaigns she created with an aim to protect the cultural heritage of Polish Jews. She is the founder of Shalom Foundation (1988), inventor and organizer of the Jewish Culture Festival “Singer's Warsaw” (since 2003), founder of the Jewish kindergarten Lauder Morasha. A joint initiative of Gołda Tencer and Professor Jadwiga Bińczycka, head of the Polish Association of  Janusz Korczak involved Korczak's monument in Świętokrzyski Park in Warsaw (unveiled in 2006). Her efforts led to placement of a plaque on one of the walls of Gdański Train Station that commemorates events of March 1968 (2008).

An important part of her activities, she runs projects that promote knowledge about Jewish culture, such as the contest “Culture and History of Jews in Poland” and publishing, e.g. “Memory. History of Jews Before, During and After the Holocaust” or “Nothing Given,” i.e. The collection of Wisława Szymborska poems in five languages, including the first translation into Yiddish. Organized by Gołda and Shalom Foundation, the photo exhibition “And I keep seeing their faces...” (Zachęta, 1996) featuring photographs of Polish Jews has visited 30 countries so far, including the United States, France, Mexico, Canada, Spain, Lithuania, Argentina and Costa Rica.  During the 65th and the 70th Anniversary of the Warsaw Ghetto Uprising, Gołda Tencer was supervising the artistic part of the celebration inviting to the concert gala held in the Teatr Wielki (The National Theatre and Opera House) The Israel Symphonic Orchestra conducted by Zubin Mehta. In 2015, she appeared in the Gala Concert “Ladies & Gentlemen, There Will be War!” directed by M. Strzępka, part of the 36th Actor Song Review in Wrocław.

Her artistic output, organizational achievements and constant support for the Jewish culture in Poland and around the world was recognized and resulted in numerous important awards and decorations, including: The Golden Lira (1983), the highest decoration awarded in Israwel for the achievements in promotion of the Jewish culture, Order of Polonia Restituta Fifth Class, the Knight's Cross (2002) for her outstanding contribution for the Jewish community, Order of Polonia Restituta Fourth Class, the Officer's Cross (2005), “Distinguished Service for Tolerance” Medal (2006), the Golden Medal Gloria Artis (2009), Order of Polonia Restituta Third Class, the Commander's Cross (2011), The Award of the Capital City of Wars (2014) and the Medal “Pro Masovia” (2015).