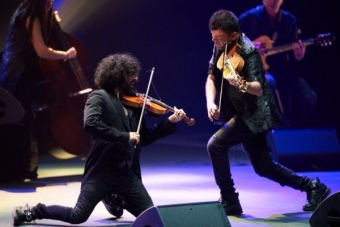 This will be a special, Jubilee, 15th edition of the Jewish Culture Festival.

Extremely lavish, full of stars and young artists. 9 days of the cultural feast, more than 200 events, over 250 artists from Poland and other corners of the world. Multiple musical and theatrical genres, a mixture of styles and trends - and it all comes with one common denominator: inspired by both traditional and contemporary Jewish culture.

Singer Festival is a renowned brand and Warsaw’s cultural showcase. Every year, at the end of summer holidays and the beginning of the new school year the areas surrounding Grzybowski Square, the Synagogue and Próżna Street become an epicenter of festival events. But the festival wave will take whole Warsaw: theatres, concert halls, music centers, clubs and cafes, outdoor locations from East to West of the city - all will offer concerts, shows, film screenings, dance workshops, walks and literary meetings. Spread over several days, this will be the time and a cultural feast of the city with something interesting for everyone.

The 15th Festival will be truly international. Our guests will come from Israel, USA, Germany, France, Denmark, Belgium, Spain and Japan. International music bands and theatre groups will prove that art is beyond, that it connects, enriches and inspires. Singer's Warsaw is a multicultural feast which shows that the intermingling and intertwining of cultures can set a creative sparkle and a path of artistic development, it can crash bad emotions and social tensions, make us realize that we are a community of people who dream about beauty, good and peace.

Music - from cantors to the Japanese street marching band

As every year, we will host stars and young, original artists.

The Festival will be inaugurated by the grand, première concert of cantors in the Nożyk Synagogue. This year, brothers Yaakov and Shulem Lemmer from the United States will give performance. They will be joined on stage by the cantoral choir Kolot Israel (Israeli Voices) from Jerusalem. The Festival's finale will feature the show of the gripping and charismatic violinist, Ara Malikian, who mixes and blends Jewish, Arabic, Argentinian, Spanish and Roma themes in his music. We will hear surprising interpretations of classical masterpieces composed by, nonetheless, Vivaldi, Mozart, Paganini, the iconic compositions by Led Zeppelin, Jimi Hendrix and David Bowie as well as pieces written originally by the amazing artist. Malikian's concert is a show during which the unique violin playing comes with the amazing choreography, dance, costumes, colors and special effects. It's a force of nature!

Between the inauguration and the finale, we will hear 9 concerts given by the outstanding Polish and international musicians. The Jubilee Festival will host and feature: the famous violinist, Dominique Pifarély from France, Kenneth Dahl Knudsen's quintet (Denmark) with international lineup presenting the tracks from the latest album TÉTÉ. Dorota Miśkiewicz with Atom Street Quartet will give the concert PIANO.PL. We will also hear Gary Gutman in his joint music project, WOMAN IN BLACK, which he prepared with the vocalist Sasha Strunin, as well as Włodzimierz Nahorny, Marcin Wyrostek, Adam Bałdych, Mateusz Smoczyński. Whereas, the jazz reveal of the festival will be launched by TRANSGRESSION project of Oleś Brothers & Theo Jörgensmann who will meet again on the jazz scene of Singer's Warsaw Festival. This year, the musical event of the festival will be the latest project of Jazz Band Młynarski-Masecki who will play a truly mesmerizing collection of songs written and composed during twenty years of peace between the two world wars - a new life for the works of Henryk Wars, Jerzy Petersburski, Artur and Henryk Gold.

We will have an opportunity to meet an unusual group from Japan. Jinta-la-Mvta blends modern Tokio street music with traditional Klezmer and Balkan themes.

During their concert, JEWISH LIFE, PORTRAITS OF THE PAST, MazikDuo will offer the fans more classical sounds. Here, the classical and klezmer music will interlace, masterfully arranged by the clarinet player, Tolo Genestar and the pianist, Marc Sumsi.

And if you like music and humor, you will be happy to hear about the new program, TOGETHER WITH BROTHERS, featuring Sława Przybylska and Janusz Tylman who will traditional and modern Jewish songs in Yiddish and Hebrew. Furthermore, WoWaKin Trio will introduce us to modern arrangements of traditional Polish folk pieces, including the Jewish ones.

And that's all, in a nutshell.

Theatre fans know very well that the Festival is a time for celebrating the stage and seeing Polish and international shows in various stage formulas. This year, the theatre program is particularly plentiful. First of all, with pleasure, we announce Yiddishpiel Theatre from Israel and their wonderful stage show “Only Fools Never Get Sad” - Daniel Amagor's hit that was loved by so many world's stages, Broadway among others. Also from Israel, we will be hosting Nephesh group who will present their own stage adaptation of the classical “Gimpel the Fool” written by I. B. Singer and “Hana's Suitcase” by Emil Sher. Warsaw’s Jewish Theatre will present the best currently played stage shows, including: “Ida Kamińska,” “The Last Son,” “Wiera Gran,” “Itzik's Midrash,” “Just Like the Old Cabaret,” “A Few Foreign Words in Polish,” “Kasrylevka Town.”

The versatility of Festival’s offer

In addition to concerts and theatre shows, the Festival will offer a great number of other kinds of events, including book promotions, meetings with authors, meetings with artists, film screenings, cooking workshops, workshops for children, educational walks around Jewish Warsaw and many, many others. Let us just mention literary meetings hosted by Remigiusz Grzela, for instance with Włodzimierz Paszyński who recently published “Książki z dobrej półki [Goodreads]” and promotion of Krystyna Gucewicz's book “NOTES KRYSTYNY GUCEWICZ czyli Fołtyn w śmietanie [KRYSTYNA GUCEWICZ NOTEBOOK].” One of the meetings will be dedicated to Remigiusz Grzela's book “Double Life of A Reporter. Fallaci. Torańska.”

30th Anniversary of the Shalom Foundation

The special appeal of this year’s Jewish Culture Festival Singer's Warsaw is additionally highlighted by the fact that its founder and organizer, Shalom Foundation, is celebrating this year the 30th anniversary.  Headed by Gołda Tencer, the foundation is pursuing the mission of cultivating and promoting the Jewish tradition in Poland and its abundance. The Festival is one of the Foundation's most important ventures.

A double jubilee. A unique edition. It's worth to come back home from holidays a bit earlier.

There are festivals. And there is Singer's Warsaw.

A very special festival that takes care of the memory of Jewish-Polish cultural heritage and at the same time is open to new trends, young artists, multicultural, creative tension.

A detailed program will be available soon at www.festiwalsingera.pl and on FB www.facebook.com/FestiwalSingera