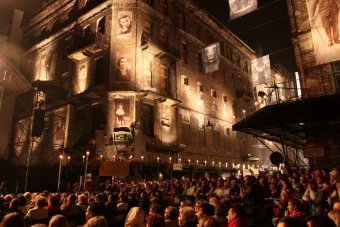 Warsaw representatives agreed to provide funds for revitalization and adaptation of the townhouse at 14 Próżna St., which will become the new permanent location of the Jewish Theatre. 150 million zlotych will be spent on the implementation of the project, which will include architectural design competition, design documentation and execution and completion of the investment.

"Together with the actors, technicians, and administration, we will put a real gem right next to Grzybowski Square. I would like to thank Mayor Hanna Gronkiewicz-Waltz, the Warsaw City Council, Mayor Czubaszek for believing in us. Today, it is really hard for me to speak but I am simply happy,” said Gołda Tencer, the Director of The Ester Rachel and Ida Kaminska Jewish Theater – Center for Yiddish Culture, who was clearly touched.

According to the decision of Hanna Gronkiewicz-Waltz, the Mayor of the capital city of Warsaw, taken in June this year, The Ester Rachel and Ida Kaminska Jewish Theater – Center for Yiddish Culture will come back to Grzybowski Square neighborhood. The new location of the Theatre and the Yiddish Culture Center will be the townhouse at 14 Próżna St. Built at the end of the 19th century, the corner five-floor tenement is one of the few fragments of the old Jewish Warsaw that survived. In the past, 14 Próżna Street was brimming with life. The wing facing  Grzybowski Square included shops and the hardware stores; whereas, on Próżna Street, Meerson and Epstein Department Store was hosted and more stores and workshops were located in the outbuildings. Until 1940, the first floor of the building hosted the Jewish prayer house. The current investment will involve reconstruction of the tenement in order to fit, according to the preliminary concepts, three stages and the backstage dedicated to the Yiddish culture promotion and activities.

"The Jewish Theatre is one of the most important keepers of the Jewish culture in Warsaw but also in Poland. It is a priority for us to create a 21st-century location for this institution. It is our obligation but also a responsibility for the culture that was a permanent part of Warsaw's landscape before the war," said Małgorzata Zakrzewska, an elected representative and the Head of the Culture and City Promotion Commission in the Warsaw City Council, just before the voting begun.